Based on the short novel of the author, the play was edited and the songs were selected by Ildikó Gáspár.Lajos Tót is a fire-fighter in Mátraszentanna, a small mountain town. His house is nice and clean, his garden is sunny and bright. If his son would not be a front line soldier in Russia, Lajos Tót would only be informed about the war from the radio. When one day the company commander of his son shows up to take some rest from the shocks of war-time, Lajos Tót and his family do their best to make his time unforgettable. Everything that one can do. But what is that one can do in hard times is a matter of perspective.

„When a snake (a rare phenomenon) devours itself is there a snake-size gap left in the world? And is there a power mighty enough to make a man devour his humanity to the last crumb? Is there or is there not? It’s quite a puzzle!” (István Örkény) 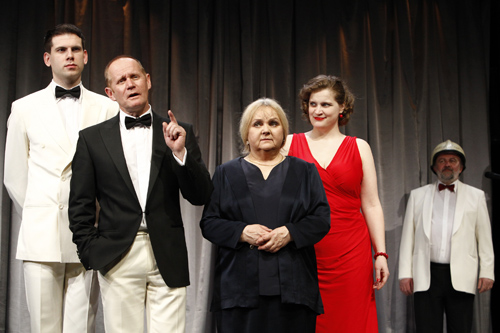