James Carter is a powerhouse musician and one of the most admired saxophonists of his generation, garnering plaudits for his role in helping to propel jazz full tilt into the future over the past twenty-five years.
Born in Detroit, Michigan, in 1969, James Carter began playing the saxophone at age 11, by 1991, had recorded with legendary trumpeter Lester Bowie on The Organizer and contributed to the 1991 collection The Tough Young Tenors.
Mastering a family of reed instruments, from sopranino to contrabass saxophones to contrabass and bass clarinets, James Carter mesmerized the jazz world after arriving in New York City in 1988 to play under the auspices of Lester Bowie.
His debut recording, JC On The Set, released in Japan when Carter was a mere 23 years old, heralded the arrival of a significant and powerful new musical force in jazz.
Recorded at the same session as his debut, Carter’s next release, Jurassic Classics (1994), found him entering the Top Jazz Albums chart for the first time.
Carter recorded his trio in 2005 for the Half Note release, Out of Nowhere, and in 2006 recorded Gold Sounds with pianist Cyrus Chestnut, bassist Reginald Veal and drummer Ali Jackson in a collaborative outing of covers of songs by the pop band Pavement.
Present Tense, Carter’s debut album on UMG’s EMARCY label was released in 2008. Produced by esteemed jazz sage Michael Cuscuna, the ten-pack of animated tunes range from jazz standards given new rhythmic traction to three originals, including the sunny, Brazilian-tinted “Bossa J.C.”

In late 2009, James Carter headlined for ‘Heaven on Earth’ where he led an all-star group of modern jazz musicians through a live session recorded at the Blue Note in New York, and released on Half Note Records. In addition to Carter on tenor, soprano and baritone saxophones, are John Medeski on Hammond B3 Organ, Adam Rogers on guitar, Christian McBride on bass and Joey Baron on drums. Together they carve out a groove that captures the buzz and vitality of jam-jazz at its most exhilarating.
Carter’s most recent recording was released in 2011, titled Caribbean Rhapsody features the Concerto for Saxophones written specifically for him by composer Roberto Sierra. Caribbean Rhapsody provides a cross-over of classical and jazz elements showcasing Carter as a supreme soloist.
James Carter, winner of multiple downbeat awards has performed, either live or in the studio, with the Lincoln Center Jazz Orchestra, the late Julius Hemphill, Ronald Shannon Jackson, the Charles Mingus Big Band, soprano Kathleen Battle, Aretha Franklin, David Murray, the Art Ensemble of Chicago, Ginger Baker, Sonny Rollins, Odean Pope, Dee Dee Bridgewater and many others. He appeared in the 1994 PBS telecast of “Live At Lincoln Center” and portrayed saxophonist Ben Webster in Robert Altman’s 1996 film, “Kansas City.”

There will be no tables in the concert hall this night. The seats may be occupied upon arrival. 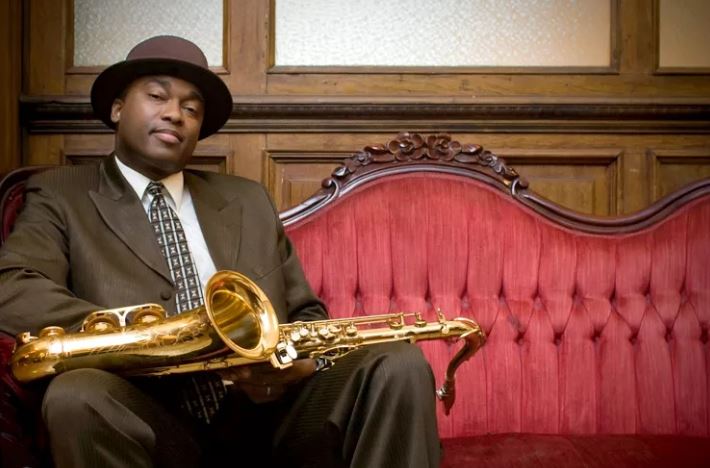